Evaluating your nose aesthetics prior to rhinoplasty surgery is critical to achieving success. To accurately analyze the nose, we use a reductionist approach to the separate components of the nose, and then evaluate possible alterations in the context of the entire face. The human face is dependent upon general symmetries, and individual asymmetries to make us both similar to each other, but also different. To evaluate the symmetries and asymmetries of the face and nose, we begin by dividing the face into five equidistant horizontal quadrants.

The ideal horizontal facial distances are based upon the horizontal length of the eyes. As seen above, the distance from the middle eyelid confluence (medial canthus) to the lateral eyelid confluence (lateral canthus) defines the proportions of the face. In general, we expect that the horizontal axis of the nose will be equal to the horizontal axis of the eye. When the nose is larger than the eyelid distance, patients commonly present requesting a reduction of their nostrils, as an enlarged nostril diameter tends to project an angry sentiment. Next, we evaluate the vertical axis of the face. We divide the face into three equidistant parts as shown above. When the vertical nasal axis is too long or short, patients often will request either an elevation or modification of their tip location.

Once a general sense of nasal size and proportion has been taken, the nose itself is evaluated by its separate components. As a rule, I start by evaluating from the top to the bottom. Again, we divide the nose into three equidistant vaults as shown in the figure below. The upper, bony 1/3 is evaluated for profile curvature, and for horizontal size. Here, we want to evaluate specifically how wide and how projecting the nasal bones are, and we want to define the nasofrontal angle. 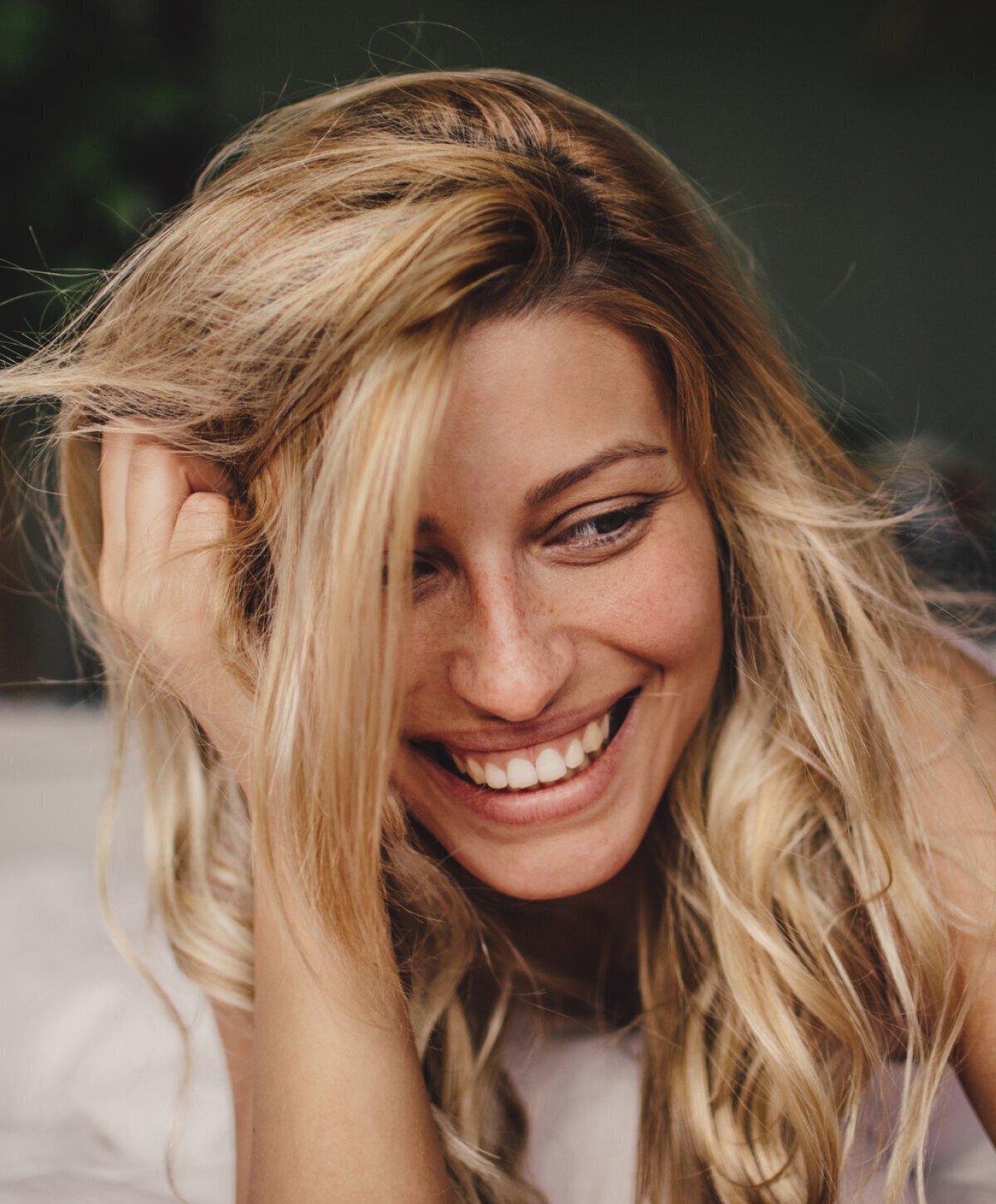 The nasofrontal angle, as shown on the diagram and photograph below, shows how the nasal bone articulates with the glabella and brow.

In the ideal nose, there should be a small recess at the point where the nose meets the glabella and brow. As well, the ideal angle for this area should sit between 115-130 degrees. Specific interventions to improve this area include osteotomy and rasping. 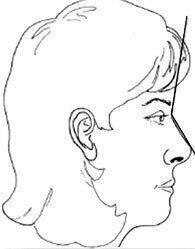 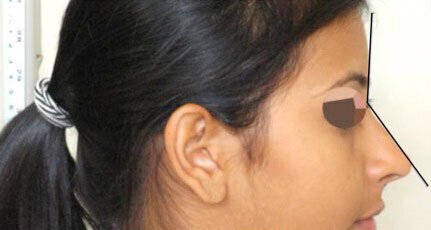 Next, the mid vault is evaluated, specifically by the nasofacial angle, and again by evaluating the lateral dimensions of the nose. Many patients present stating that they feel their nose is too large on their face.

This sense of size can often be driven by an excessively wide nasal bone structure in the middle vault. To evaluate this area, we again see how the nose “fits into the face” on the sides. The line where the nose meets the facial bone structure is called the dorsal aesthetic line. This line is critically important to facial aesthetics. It is corrected by osteotomy and repositioning of the bone. 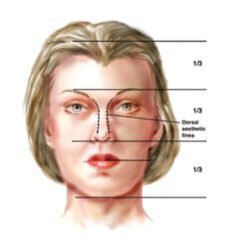 Dorsal aesthetic lines of the nose. 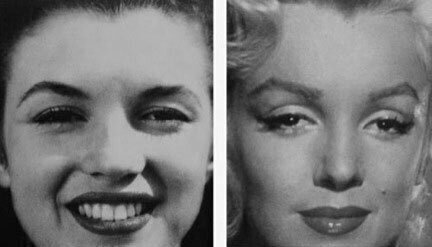 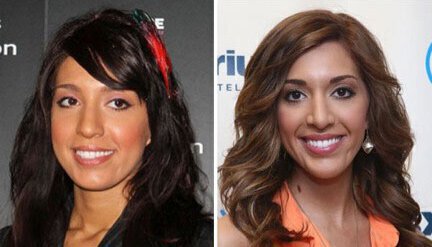 Next, the nasofacial angle is defined. The nasofacial angle helps to quantify how much nasal bone and cartilage should be removed to reduce the nasal hump. Unlike the nasofrontal angle shown above, this angle evaluates from the top of the nose down towards the lips. This angle should be much more acute than the nasofrontal angle to provide the best possible aesthetics. As you can see from the diagram and photograph above, this angle should sit between 30-40 degrees. As the dorsal hump becomes prominent, this angle increases.

One of our most requested rhinoplasty procedures is nasal hump removal. When undertaking this procedure, we strive to create a nasofacial angle of 30-40 degrees during surgery to produce the best possible nasal profile. 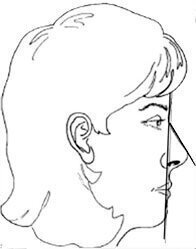 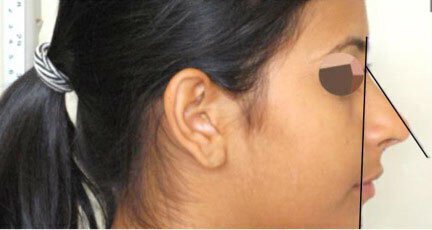 Next, we want to evaluate what is known as the nasomental angle. The nasomental angle gives us a sense of how the nasal tip structure (lower 1/3) fits with the rest of the nose, and how it lines up with chin projection.

This angle is absolutely crucial to evaluate in patients who want to change how their nasal tip looks. Poorly projecting tips, bulbous nasal tips, and “witches tip noses” all obscure this angle, producing poor overall nasal and facial aesthetics. This angle evaluates both nasal tip position, and gives a sense of chin projection. As you can see from in this patient, her overall nasal angle is outstanding, but her chin projection is less than ideal. When evaluating her normal facial profile, it is easy to miss this deviation from the ideal, but in the context of the nasomental angle, it can be easily identified.

Many of our patients, especially female patients will benefit by combining chin augmentation with cosmetic rhinoplasty. Once the nasomental angle has been evaluated, we then direct our attention to the chin itself. The chin is directly evaluated using what is called the mentocervical angle. This angle directly evaluates the chin projection as it relates to lip projection and nasal projection. For the ideal facial aesthetic, this angle should be between 80-95 degrees. In any scenario where this angle is less than 80 degrees, a chin augmentation should strongly be considered. In patients with greater than 95 degrees, a chin reduction should be considered. 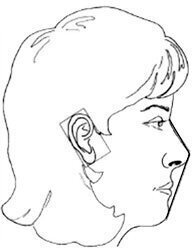 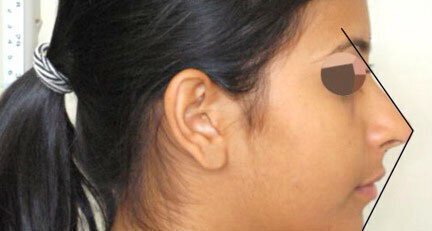 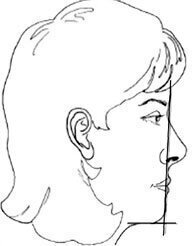 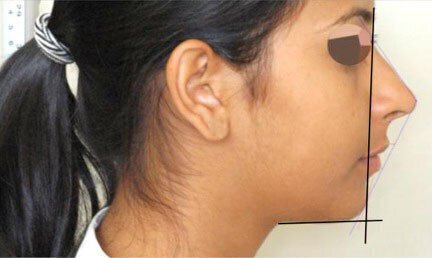 The goal of a rhinoplasty is to produce natural, harmonious nasal and facial aesthetic results. Once all of these angles are taken into consideration, a final analysis is undertaken by Dr. Durkin. A comprehensive plan for rhinoplasty is then undertaken. Simulation software is available to patients to see how their nose will look following surgery. Consultations for rhinoplasty commonly take 45 minutes to an hour. Dr. Durkin will also show multiple examples of before and after at your consultation. 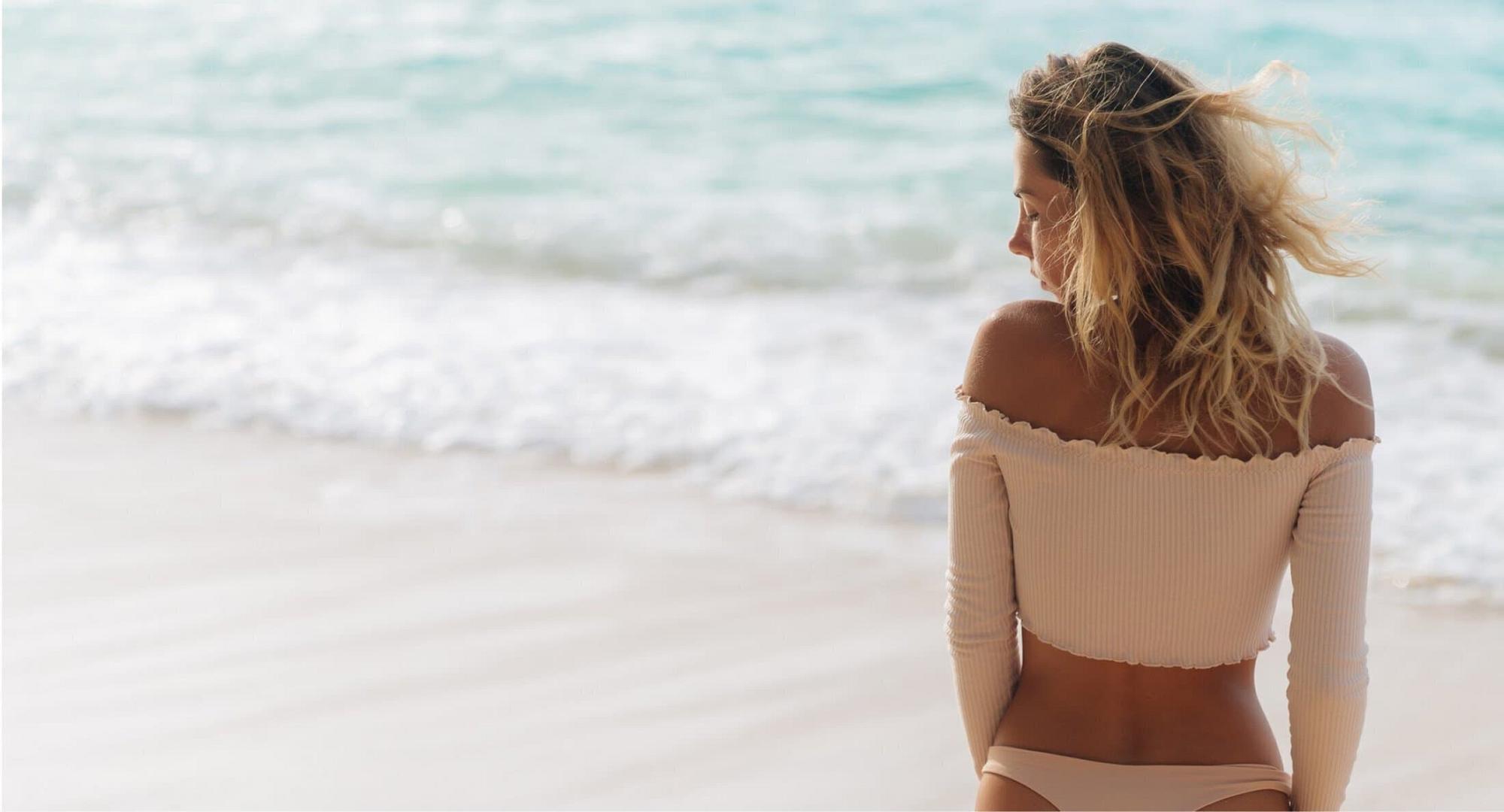 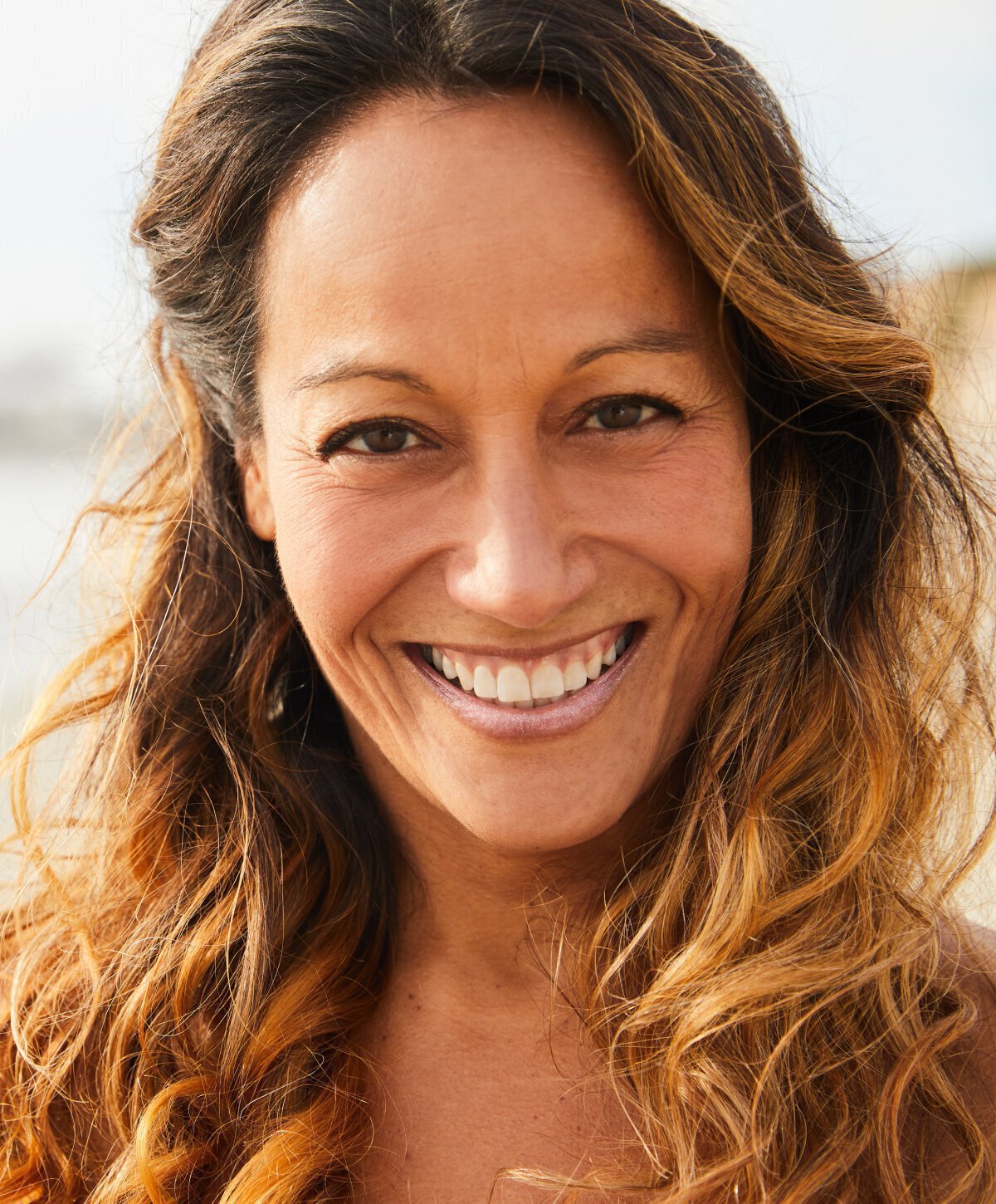 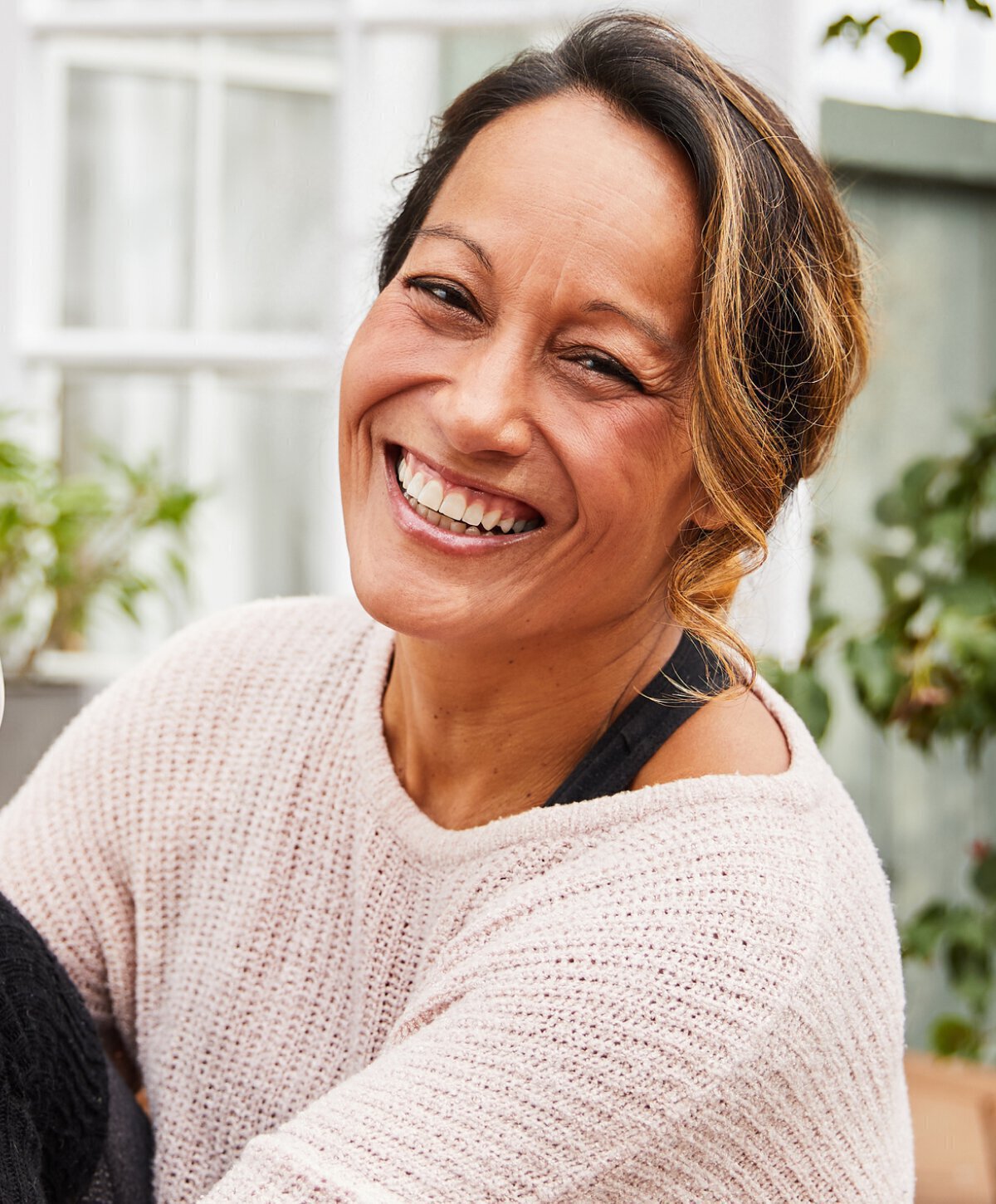